Using DNA, USGS researchers are able to detect the presence of invasive species in aquatic ecosystems. The DNA they use is literally floating around in the environment and is called environmental DNA (eDNA) and is a powerful tool for the early detection of invasive species and pathogens, which can cause serious ecological and economic damage. USGS researchers are also combining the use of eDNA with robotic technology and have deployed automated, robotic eDNA samplers that can detect invasive species in aquatic systems. By combining biology and technology, USGS science can help resource managers detect invasive species and other biological hazards early or monitor their spread, which may provide managers with adequate time and flexibility in developing management strategies, including invasive species control.

Nonnative species can be ecologically disruptive and economically damaging, and early detection is important for developing robust monitoring and control strategies. However, trying to find a handful of individuals invading new habitat can be nearly impossible, especially if those individuals are small or well-hidden as is commonly the case in aquatic systems.

To address this issue, scientists use biology and the aquatic habitat the invasive species live in and turn those factors into a tool they can use. Organisms shed and excrete DNA into the environment, and this DNA, termed environmental DNA (eDNA), can be found suspended in the water, making it accessible to researchers who have the means to extract it from water samples. Using eDNA can be a more effective approach to detect difficult-to-find invasive species than using nets, electro shocking, visual surveys, or other traditional means of detecting aquatic invasive species.

Using eDNA can be part of an early warning system letting resource managers know that invasive species are now present in a habitat that they were previously not. Early detection of invasive species may provide managers flexibility in how they develop their management strategies and could increase the chances of successful control efforts because the invasive species’ population numbers might be relatively low at the time of detection. Once an invasive species gets well established in a habitat, controlling that species can become very difficult and expensive.

Using eDNA: Testing water samples from rivers in Oregon, Colorado, Idaho, Montana, Wyoming, and Minnesota, we have successfully used eDNA to detect invasive species. Specifically, we have been able to detect the DNA of nonnative fish, aquatic weeds, and aquatic invertebrates, such as mussel and snail species, and a microscopic parasite that causes proliferative kidney disease in fish, which can cause fish kills in the salmon family (salmon, trout, char, etc.). We have repeatedly used eDNA sampling to detect dreissenid mussel (zebra and quagga mussels) DNA from rivers, lakes and reservoirs. This is particularly exciting because zebra and quagga mussels are a notoriously ecologically and economically harmful group of invasive species that grow on hard surfaces and can damage water pipes and other infrastructure, recreational vehicles, and even other organisms like turtles. They can also outcompete native mussels, disrupt native aquatic communities, and alter how aquatic ecosystems function. Once dreissenid mussels become well established, they are extremely difficult to manage, so having an early detection system that warns managers these mussels have started to occupy a new habitat could be very valuable in controlling these invaders before their numbers become overwhelming.

eDNA and Robots: We, along with our collaborators from other USGS Science Centers and the Monterey Bay Aquarium Research Institute, deployed robotic eDNA samplers to test if they could provide as reliable, timely eDNA samples as those collected by humans. Our results indicate that the robotic sampler could provide samples of similar quality as those taken by humans. In contrast to humans, the robotic samplers can be programed to take samples at a higher frequency than a human could take them, which could be a serious advantage when trying to detect potentially harmful invasive species as early as possible. 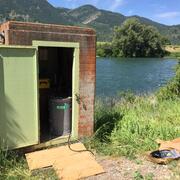 USGS researchers are working with the Monterey Bay Aquarium Research Institute to optimize autonomous, robotic samplers for detection of DNA fragments shed by biological threats (BT; invasive species, parasites, pathogens) in our nation’s waters. Finding DNA fragments (a method known as environmental DNA sampling) produced by an emerging BT in water is akin to finding a needle in a haystack—many...
Learn More
link 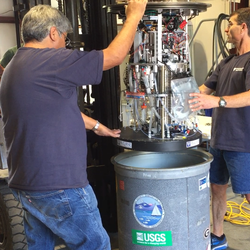 Using Robots in the River: Biosurveillance at USGS streamgages

For more than a decade, researchers around the world have shown that sampling a water body and analyzing for DNA (a method known as eDNA) is an effective method to detect an organism in the water. The challenge is that finding organisms that are not very abundant requires a lot of samples to locate this needle in a haystack. Enter the "lab in a can", the water quality sampling and processing robot...
By
Ecosystems, Invasive Species Program, Northern Rocky Mountain Science Center, Wyoming-Montana Water Science Center
link
July 19, 2019

Using Robots in the River: Biosurveillance at USGS streamgages

For more than a decade, researchers around the world have shown that sampling a water body and analyzing for DNA (a method known as eDNA) is an effective method to detect an organism in the water. The challenge is that finding organisms that are not very abundant requires a lot of samples to locate this needle in a haystack. Enter the "lab in a can", the water quality sampling and processing robot...
Learn More

The costs of invasive species in the United States alone are estimated to exceed US$100 billion per year so a critical tactic in minimizing the costs of invasive species is the development of effective, early-detection systems. To this end, we evaluated the efficacy of adding environmental (e)DNA surveillance to the U.S. Geological Survey (USGS) streamgage network, which consists of > 8,200 stream
By
Ecosystems, Water Resources, Forest and Rangeland Ecosystem Science Center, Idaho Water Science Center, Northern Rocky Mountain Science Center, Upper Midwest Environmental Sciences Center, Pacific Northwest Environmental DNA Laboratory
June 24, 2019

Environmental DNA (eDNA) detection probability increases with volume of water sampled. Common approaches for collecting eDNA samples often require many samples since these approaches usually use fine filters, which restrict the volume of water that can be sampled. An alternative to collecting many, small volume water samples using fine filters may be to collect fewer, large volume water samples us
By
Ecosystems, Northern Rocky Mountain Science Center
September 18, 2018

Conventional PCR is an established method to detect Tetracapsuloides bryosalmonaeDNA in fish tissues and to confirm diagnosis of proliferative kidney disease (PKD) caused by T. bryosalmonae. However, the commonly used PKX5f‐6r primers were designed with the intention of obtaining sequence information and are suboptimal for determining parasite DNA presence. A new PCR assay to detect T. bryosalmona
By
Ecosystems, Northern Rocky Mountain Science Center
December 31, 2017

A probe-based quantitative real-time PCR assay was developed to detect Tetracapsuloides bryosalmonae, which causes proliferative kidney disease in salmonid fish, in kidney tissue and environmental DNA (eDNA) water samples. The limits of detection and quantification were 7 and 100 DNA copies for calibration standards and T. bryosalmonae was reliably detected down to 100 copies in tissue and eDNA sa
By
Ecosystems, Northern Rocky Mountain Science Center
September 14, 2016

Determining the success of invasive species eradication efforts is challenging because populations at very low abundance are difficult to detect. Environmental DNA (eDNA) sampling has recently emerged as a powerful tool for detecting rare aquatic animals; however, detectable fragments of DNA can persist over time despite absence of the targeted taxa and can therefore complicate eDNA sampling after
By
Ecosystems, Northern Rocky Mountain Science Center
January 1, 2016

Considering the harmful and irreversible consequences of many biological invasions, early detection of an invasive species is an important step toward protecting ecosystems (Sepulveda et al. 2012). Early detection increases the probability that suppression or eradication efforts will be successful because invasive populations are small and localized (Vander Zanden et al. 2010). However, most invas
By
Ecosystems, Northern Rocky Mountain Science Center

USGS researchers and their collaborators demonstrated the efficacy of using robotic environmental DNA samplers for bio surveillance in freshwater...

Detecting Invasive and Rare Species with the National Streamflow Network

Innovation in Addressing Invasive Species and Disease in Montana Waters

Western waters support some of the most intact aquatic ecosystems in North America, yet invasive species and emerging infectious diseases pose...