It doesn’t take hurricane-force gales and torrents to disrupt ocean and estuarine shoreline ecosystems, but they certainly give Mother Nature a big hand. Coastal wetlands can be especially vulnerable, potentially drowning or getting buried beneath sediment.

If you don’t live near a coast and enjoy the benefits firsthand, you might think what happens to a shoreline has no real effect on you, unless you’ve made vacation plans. But Julie Bernier, a geologist for the U.S. Geological Survey, points out that coastal wetlands are, in fact, quite connected with other parts of the country.

“They provide a huge variety of services,” Bernier said. “They’re important fisheries for any number of seafood, mussel, shellfish. … They’re nurseries for a number of commercially viable fish. They provide coastal protection against storms.”

Coastal wetlands and barrier islands also welcome migratory birds in winter—the same birds sought after by landlocked duck hunters and birdwatchers during other parts of the year, Bernier said.

Beaches and sand dunes tend to get more attention, but Bernier focuses on the wetland areas of the coast. Her research has ranged from the Chandeleur Islands of Louisiana, to Assateague Island shared by Maryland and Virginia, to the shores of New Jersey and New York. Her background is in sedimentology and stratigraphy, but she also finds Landsat satellite data useful for revealing changes over time.

Wetland Area Before and After Hurricane Sandy

Some coastal changes are abrupt and obvious. Assateague, for example, is a barrier island running parallel to parts of Maryland and Virginia, its beaches, dunes, forests, and marshes separating the rigors of the Atlantic Ocean from the mainland. But Assateague didn’t actually become an island until 1933, when the Chesapeake-Potomac Hurricane carved an inlet, suddenly separating Assateague from Fenwick Island (which is actually a peninsula) to the north.

Nearly a decade ago, storm surges, wind, and rain assailed Assateague three times in a little more than a year, the last storm being Hurricane Sandy in October 2012. Bernier and her team wanted to see how much change the storms brought to the wetlands and vegetation of Assateague and areas along the coast south to Metompkin Bay, Virginia. With different iterations of Landsat satellites circling the Earth for nearly 50 years making continuous observations, it was easy to analyze images across more than three decades.

“The long-term history really gives you an idea of both how significant and how persistent any immediate post-storm changes are,” Bernier said.

Studies after hurricanes had shown coastal wetland losses in the past, and this held true for Bernier’s study. Although it had changed little from 1984 to 2011, total wetland area, along with total land area, decreased significantly after the 2011 and 2012 storm seasons. But, while other hurricane studies showed recovery after several growing seasons, the loss of marshes—many of which were in the middle or on the back side of barrier islands—persisted through 2017.

“We expected, certainly, that Sandy would have done some damage, although we weren’t certain what we would expect in terms of the actual magnitude of the changes because Maryland and Virginia were fairly far to the west of the actual Hurricane Sandy track,” Bernier said.

“But it did push a lot of storm surge, and then it was a big enough storm that it definitely brought rain bands.”

Storm surges can swamp urban areas, bringing water many feet higher than normal to the coast and causing a devastating loss to life and property.

Hurricane damage to wetlands typically doesn’t make those kinds of headlines. But surges can flood wetlands indefinitely, bury them with sediment, or sweep away vegetation. If they don’t lose their wetland identity completely, they still may face a troubled future.

“If you start with a degraded wetland system, it’s probably that much more vulnerable to future storms, whether it’s one that’s a Hurricane Sandy in terms of size and strength, or just impacts of multiple storms in a pretty short succession,” Bernier said. “Even if you have a period of relative storm quietness, if you have opened up a significant amount of open water ponds, those can be prone to subsequent erosion, just at the pond edge, and enlargement can also affect the integrity of the wetlands.”

Coastal managers can use information like Bernier’s Landsat-derived research on wetland change to help model coastal vulnerability, she said, with data including shoreline position, dune elevation, and potential wetland area. Models can then help with decision making.

Coastal wetlands face a variety of threats in addition to storms, Bernier added. General sea level rise can drown marshes if they’re unable to keep up by accumulating biomass or sediment. Winter storms can also bring flooding. Manmade canals can contribute to shoreline erosion. Sea level change or climate change, or both, can encourage vegetative changes.

Bernier considers the complexity of wetlands along the East Coast striking. Urban areas are more common than in the places she’s studied in Louisiana, where wetlands may simply disappear by permanently converting to open water—sometimes traced to land subsidence, a lowered elevation, from oil and gas production.

When Bernier visited Assateague to collect cores of sediment from marshes, “it was very different than any place I’d been,” she said. “You’ve got the forest on some of the old beach ridges, or the old coastal ridges. You’ve got the wetlands in the back. … It’s a very complex landscape. It’s an interconnected system. One of the things that is becoming more common is people are trying to study whole system evolution of barrier settings rather than just focusing on the beach and the dune.”

Complex problems benefit from as much relevant data as possible. In Bernier’s studies, that data can range from sediment samples to Landsat data, which she calls extremely valuable. Her Louisiana work used aerial photography of the coastline taken every 10 or 20 years dating back to the 1930s, and more recently the USDA National Agricultural Imagery Program, which takes photos every two years. But a Landsat satellite’s schedule of capturing each scene on Earth every 16 days—or currently, with Landsat 7 and Landsat 8 both in orbit, every 8 days—makes it a long-term, “very consistent data source.”

The next satellite in the series, Landsat 9, is set to launch in fall 2021 to ensure this consistency will continue for researchers and decision makers worldwide.

A Landsat image is not just a natural-color photo of the shoreline, sometimes including a single infrared band, like aerial imagery might offer, Bernier said. “The multispectral bands give it a lot more ability to look at different band combinations to use in classification” of types of land cover.

Using lidar (light detection and ranging) as well—obtained by sending laser pulses to surfaces and measuring the time it takes for them to return—adds elevation data to the mix.

Barrier islands can be quite remote, and Bernier points out that “the logistics of having a field crew out there for long periods of time can get very complex.”

Remote sensing tools can help gather valuable information that otherwise would take a lot of time and expense to collect. 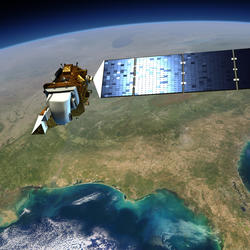 From mapping wildfires and permafrost thaw in Alaska to tracking algal blooms and Gypsy moth invasions in Ohio, the U.S. Geological Survey (USGS) Landsat Program offers an expansive list of benefits across all 50 States. Click the publications tab above to download each fact sheet!

From mapping wildfires and permafrost thaw in Alaska to tracking algal blooms and Gypsy moth invasions in Ohio, the U.S. Geological Survey (USGS) Landsat Program offers an expansive list of benefits across all 50 States. Click the publications tab above to download each fact sheet!

Maryland, called “America in Miniature,” encompasses nearly every geographical feature in the United States except a desert. Water dominates the State, whose borders run along much of Chesapeake Bay. The bay is the country’s largest estuary, where freshwater from watershed tributaries mingles with the ocean’s saltwater and teems with life.The Chesapeake Bay faces threats from erosion, pollution, r
By
Earth Resources Observation and Science Center, National Land Imaging Program, Earth Resources Observation and Science (EROS) Center , Landsat Missions