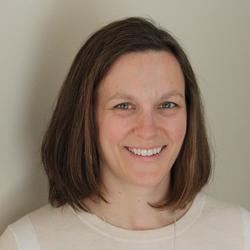 Laura Hubbard is a Hydrologist with the Upper Midwest Water Science Center and the co-lead of the Food Resources Integrated Science Team within the Ecosystems Mission Area Environmental Health Program.

Laura Hubbard earned a B.S. in Geological Sciences from the University of Wisconsin and an M.S. in Earth Sciences (Hydrology) from Indiana University. She began her career at the USGS as a student trainee assisting urban non-point and rural edge-of-field runoff projects. Beginning in 2007, she led projects examining nutrient retention in restored and native oxbow wetlands. Shortly after she began working on projects focused on contaminants of emerging concern, including characterizing chemical and microbial contaminants from animal feeding operations and the hydrological, chemical, and biological effects of eliminating a wastewater treatment facility discharge from an urban stream ecosystem. As a co-lead of the Food Resources Integrated Science Team within the USGS Ecosystems Mission Area, she has led and coordinated national studies investigating agricultural and urban contaminants in groundwater, surface water, and plant and animal tissue including viruses, bacteria, pathogens, per- and polyfluoroalkyl substances, disinfection by-products, pesticides, and pharmaceuticals.

Iodinated disinfection byproducts (DBPs) are among the most toxic DBPs, but they are not typically measured in treated water. Iodinated DBPs can be toxic to humans, and they also have the potential to affect aquatic communities. Because of the specific use of iodine and iodine-containing compounds in dairies, such livestock operations can be a potential source of iodinated DBPs in corresponding re
By
Water Resources, Ecosystems, Toxic Substances Hydrology, Environmental Health Program, California Water Science Center
April 6, 2016

Studies in Iowa have long documented the vulnerability of wells with less than 50 feet (15 meters) of confining materials above the source aquifer to contamination from nitrate and various pesticides. Recent studies in Wisconsin have documented the occurrence of viruses in untreated groundwater, even in wells considered to have little vulnerability to contamination from near-surface activities. In
By
Water Resources, Central Midwest Water Science Center
April 30, 2015

Riverbank filtration potential of pharmaceuticals in a wastewater-impacted stream

To determine the prevalence of mycotoxins in streams, 116 water samples from 32 streams and three wastewater treatment plant effluents were collected in 2010 providing the broadest investigation on the spatial and temporal occurrence of mycotoxins in streams conducted in the United States to date. Out of the 33 target mycotoxins measured, nine were detected at least once during this study. The det
By
Water Resources, Ecosystems, Toxic Substances Hydrology, Environmental Health Program, Kansas Water Science Center, Central Midwest Water Science Center
April 19, 2013

Phytoestrogens and mycotoxins in Iowa streams: An examination of underinvestigated compounds in agricultural basins