Land subsidence is a loss of ground elevation, often experienced as the ground slowly sinking over the course of years. In eastern Virginia, high rates of groundwater use is a major factor in the land subsidence affecting the area.

The Virginia-West Virginia Water Science Center, with the help of our partners, has been monitoring land subsidence in the Virginia Coastal Plain since 1979 using a variety of tools and methods. This has included recording changes in land-surface elevation and groundwater levels, as well as expanding the Virginia extensometer network. This important long-term monitoring can help researchers more accurately predict the severity of future flooding, can help communities better understand the impacts of increased groundwater use and make sustainable decisions, and can help measure the effectiveness of groundwater restoration efforts.

Learn More About our Partners

How is Subsidence Measured?

The Land Subsidence Program aims to:

Land subsidence is caused by a combination of factors, both natural and anthropogenic. The Virginia Coastal Plain is particularly vulnerable to land subsidence. Factors like high rates of groundwater withdrawals, the resulting aquifer compaction, and post-glacial isostatic adjustment all contribute to the area's vulnerability. This in turn increases the Coastal Plain’s vulnerability to sea level rise. Therefore, it is important to understand exactly how much subsidence this area of Virginia is experiencing, and how that subsidence may vary across the study area.

While the effects of subsidence are most obvious at the surface, the causes lie in the subsurface. To understand subsidence in the Virginia Coastal Plain, we must understand aquifer systems like the Potomac Aquifer System, the source of the majority of Eastern Virginia’s drinking water. Historically, groundwater was so abundant in the Potomac Aquifer System that it flowed freely from wells. This is because in confined aquifer systems like the Potomac, the groundwater is often under pressure. However, when groundwater is pumped from an aquifer or aquifer system for human use faster than it can recharge, groundwater levels and water pressure in the aquifer fall. Over time, if water levels do not recover, the aquifer compacts under the weight of the ground above, causing the land to subside as illustrated below.

When subsidence occurs near the coast, such as on the Virginia Coastal Plain, it compounds the effects of sea-level rise in response to climate change. The sinking ground causes relative sea level to rise faster, and potentially exacerbates its impacts. In fact, the highest rates of relative sea level rise along the entire Atlantic Coast are observed in Virginia, where land-subsidence rates, as measured by extensometers in Franklin, Suffolk, and Nansemond, are on the order of millimeters per year. This may seem small, but it impacts a large area where many people live, an area that is already prone to flooding and subject to the adverse effects of sea-level rise.

Though subsidence is a serious concern, there may be ways of slowing subsidence by restoring depleted aquifers in the Virginia Coastal Plain. The USGS has partnered with the Hampton Roads Sanitation District to monitor the effects of the ongoing Sustainable Water Initiative for Tomorrow, or SWIFT project. SWIFT seeks to reduce, and potentially reverse, land-subsidence in the region though introduction of highly treated wastewater back into the Potomac. However, SWIFT is not yet running at full-scale and groundwater withdrawals persist at high rates, so continued monitoring of land-surface deformation remains critical in coastal Virginia.

How is Subsidence Measured?

The USGS uses several different methods of measuring subsidence across the Virginia Coastal Plain. Each method has its own benefits and drawbacks, so using a variety of methods helps USGS scientists construct a complete picture of how the region is changing. Visit this page's data tab to access our measurement data.

Borehole extensometers are instruments that directly measure the changes in aquifer-system thickness independent of other causes of vertical land motion that are affecting the Virginia Coastal Plain (such as forebulge collapse). These instruments provide a high-resolution (sub-millimeter), continuous record and are relatively simple in function. A borehole is drilled to the bottom of the aquifer system, down to the non-porous basement rock, which is where the extensometer pipe will ‘rest’ while extending to a predetermined height above the land surface. Once installation is complete, subsequent compaction of the aquifer system that produces subsidence will increase the length of pipe aboveground. Conversely, expansion of the aquifer system will produce uplift and decrease the length of pipe aboveground. Though borehole extensometers are incredibly precise, they only measure subsidence at a specific location and installing them is a significant undertaking, so they are often supplemented with more easily scalable methods of land subsidence monitoring. Click here for more in-depth information on our extensometer network.

Geodetic surveying is a method of recording the exact coordinates of a specific fixed location. When these surveys are repeated at the same location in an area affected by subsidence, scientists can determine how much the land surface has moved over time. During a survey, GPS equipment is placed on top of a special benchmark that has been permanently anchored into the ground to record whether the land has moved, and by how much. These surveys measure total land motion and cannot separate out what is caused by aquifer compaction and what is caused by other factors; however, this method can more easily measure subsidence over a wider area than extensometers alone. Geodetic surveys also play a critical role in validating InSAR data.

InSAR (interferometric synthetic aperture radar) is a satellite radar technique that can measure changes in land elevation over a large area. The maps generated by this technique, called interferograms, show how much the land surface elevation has changed between satellite passes. This technique can be used to monitor larger areas of the Virginia Coastal Plain than geodetic surveying and extensometers alone. However, InSAR data is less accurate than the other two methods, and cannot reliably measure subsidence of less than 5 millimeters, so it is most valuable when paired with geodetic and extensometer data. InSAR data is also useful for identifying subsidence 'hotspots' or areas of unexpected subsidence where future benchmarks or extensometers may need to be installed.

Click below to explore other aspects of our land subsidence research on the Virginia Coastal Plain.

Land subsidence is being monitored at extensometers installed in Virginia near Franklin, Suffolk, and Nansemond. Click the links below to access extensometer data at these sites:

Groundwater levels are being monitored at each of the extensometer locations. Click the links below to access groundwater data at each site:

This data release is a compilation of annual Global Navigation Satellite System (GNSS) surveys of a network of 26 vertical control points (benchmarks) in the Hampton Roads region of southeastern Virginia. Surveys are conducted annually during the winter and are structured to collect a minimum of 24 hours of position data when possible at an interval of 15 seconds or less at each benchmark location
By
Virginia and West Virginia Water Science Center
December 9, 2013

The pumpage of fresh ground water in the United States in 1995 was estimated to be approximately 77 billion gallons per day (Solley and others, 1998), which is about 8 percent of the estimated 1 trillion gallons per day of natural recharge to the Nation's ground-water systems (Nace, 1960). From an overall national perspective, the ground-water resource appears ample. Locally, however, the availabi
By
Water Resources

Many of the groundwater monitoring wells on the Virginia Coastal Plain as well as the extensometers at Franklin, Suffolk, and West Point are funded in part or entirely by the Virginia Department of Environmental Quality. Our important monitoring work would not be possible without their partnership. 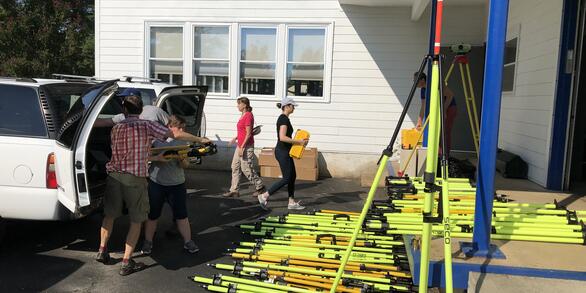 Scientists from the USGS are collaborating with the National Geodetic Survey, Virginia Tech, Maryland Geological Survey, Hampton University, The University of Maryland, The Virginia Institute of Marine Sciences, the Delaware Geological Survey, the Hampton Roads Planning District, and others to measure land-surface subsidence in the Chesapeake Bay region. 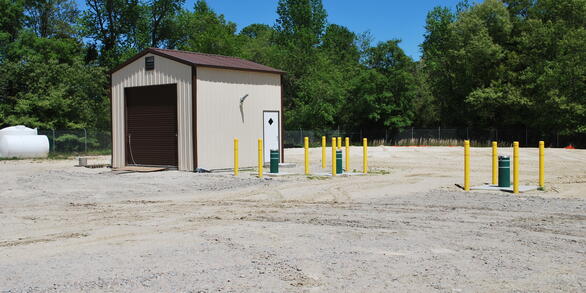 The USGS is partnering with the Hampton Roads Sanitation District (HRSD) to monitor the effects of their SWIFT program. Our Nansemond extensometer was generously funded by HRSD and is installed at HRSD's pilot aquifer injection site, where it can monitor for any changes in the rate of subsidence.