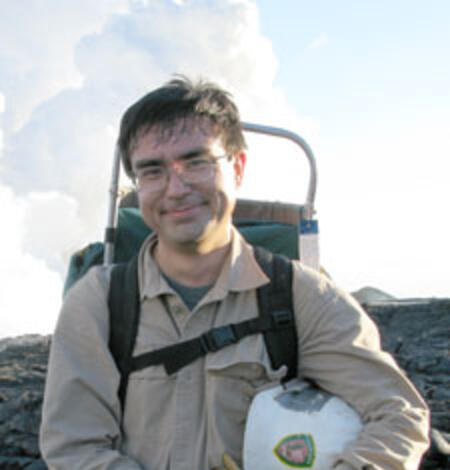 Laszlo Kestay is a planetary volcanologist at the US Geological Survey's Astrogeology Science Center.

Laszlo Kestay is a planetary volcanologist working for the US Geological Survey's Astrogeology Science Center. His last name was formerly Keszthelyi and this spelling is still used for his publications. He has worked for the USGS since 1991 but was only hired in 2003. He is member of the NASA MRO HiRISE and ESA ExoMars CaSSIS science teams.

The University of Texas at Austin

2012-2018       Science Center Director Astrogeology Science Center U.S. Geological Survey.  Manage the science center as it enables humankind's exploration of the Solar System with support for space missions from conception to beyond the grave.

This 1:1,000,000-scale geologic map of the Athabasca Valles region of Mars places the best-preserved lavas on Mars into their geologic context. The map shows vigorous geologic activity in the most recent epoch of the geologic history of Mars, which is extremely unusual for the planet. In these atypically youthful terrains, the interpretations of geologic processes are exceptionally robust for plan
By
Natural Hazards, Astrogeology Science Center
March 14, 2012

Io, discovered by Galileo Galilei on January 7–13, 1610, is the innermost of the four Galilean satellites of the planet Jupiter (Galilei, 1610). It is the most volcanically active object in the Solar System, as recognized by observations from six National Aeronautics and Space Administration (NASA) spacecraft: Voyager 1 (March 1979), Voyager 2 (July 1979), Hubble Space Telescope (1990–present), Ga
By
Natural Hazards, Astrogeology Science Center
Filter Total Items: 70
January 19, 2022

IntroductionThis report summarizes the software and algorithms that are used to calibrate images returned by the High Resolution Imaging Science Experiment (HiRISE) camera onboard the Mars Reconnaissance Orbiter (MRO) spacecraft. The instrument design and data processing methods are summarized below, followed by a description of relevant calibration data and details of the calibration procedure. I
By
Natural Hazards, Astrogeology Science Center
August 19, 2021

IntroductionWe created this guide to introduce the user to the San Francisco Volcanic Field as a terrestrial analog site for planetary volcanic processes. For decades, the San Francisco Volcanic Field has been used to teach scientists to recognize the products of common types of volcanic eruptions and associated volcanic features. The volcanic processes and products observed in this volcanic field
By
Natural Hazards, Volcano Hazards, Volcano Science Center, Astrogeology Science Center
July 16, 2021

Understanding the cooling process of volcanic intrusions into wet sediments is a difficult but important problem, given the presence of extremely large temperature gradients and potentially complex water-magma interactions. This report presents a numerical model to study such interactions, including the effect of heat pipes on the cooling of volcanic intrusions. Udell (1985) has shown that heat pi
By
Natural Hazards, Astrogeology Science Center
October 26, 2020

Lava that erupted during the 2014–2015 Holuhraun eruption in Iceland flowed into a proglacial river system, resulting in aqueous cooling of the lava and an ephemeral hydrothermal system. We carried out a monitoring study of this system from 2015 to 2018 to document the cooling of the lava over this time, using thermocouple measurements and data-logging sensors. The heat loss rate from advection th
By
Natural Hazards, Volcano Hazards, Volcano Science Center, Astrogeology Science Center
August 28, 2020

Compositional layering in Io driven by magmatic segregation and volcanism

Both the northern and southern arms of Kasei Valles are occupied by platy-ridged flood lavas. We have mapped these flows and examined their morphology to better understand their emplacement. The lavas were emplaced as high-flux, turbulent flows (exceeding 106 m3 s−1). Lava in southern Kasei Valles can be traced back up onto the Tharsis rise, which is also the likely source of lavas in the northern
By
Natural Hazards, Astrogeology Science Center
November 16, 2017

The Colour and Stereo Surface Imaging System (CaSSIS) is the main imaging system onboard the European Space Agency’s ExoMars Trace Gas Orbiter (TGO) which was launched on 14 March 2016. CaSSIS is intended to acquire moderately high resolution (4.6 m/pixel) targeted images of Mars at a rate of 10–20 images per day from a roughly circular orbit 400 km above the surface. Each image can be acquired in
By
Natural Hazards, Astrogeology Science Center
July 17, 2017

In 1960, Eugene Shoemaker and a small team of other scientists founded the field of astrogeology to develop tools and methods for astronauts studying the geology of the Moon and other planetary bodies. Subsequently, in 1962, the U.S. Geological Survey Branch of Astrogeology was established in Menlo Park, California. In 1963, the Branch moved to Flagstaff, Arizona, to be closer to the young lava fl
By
Natural Hazards, Astrogeology Science Center
April 21, 2017

Feasibility study for the quantitative assessment of mineral resources in asteroids

This study was undertaken to determine if the U.S. Geological Survey’s process for conducting mineral resource assessments on Earth can be applied to asteroids. Successful completion of the assessment, using water and iron resources to test the workflow, has resulted in identification of the minimal adjustments required to conduct full resource assessments beyond Earth. We also identify the types
By
Natural Hazards, Astrogeology Science Center
November 1, 2016

Determining the eruption temperature of Io's dominant silicate lavas would constrain Io's present interior state and composition. We have examined how eruption temperature can be estimated at lava tube skylights through synthesis of thermal emission from the incandescent lava flowing within the lava tube. Lava tube skylights should be present along Io's long-lived lava flow fields, and are attract
By
Natural Hazards, Astrogeology Science Center
January 4, 2016

The James Webb Space Telescope (JWST) will allow observations with a unique combination of spectral, spatial, and temporal resolution for the study of outer planet satellites within our Solar System. We highlight the infrared spectroscopy of icy moons and temporal changes on geologically active satellites as two particularly valuable avenues of scientific inquiry. While some care must be taken to
By
Natural Hazards, Astrogeology Science Center
November 1, 2015

The Athabasca Valles flood lava is among the most recent (
By
Natural Hazards, Astrogeology Science Center
link
February 12, 2014

More than 400 years after its discovery by Galileo, the largest moon in the Solar System – Ganymede – has finally claimed a spot on the map.

Sensor Data from Monitoring the Cooling of the 2014-2015 Lava Flow and Hydrothermal System at Holuhraun, Iceland

This data release is a companion to Dundas et al., NNNN. Additional description of the methods and rationale for data collection is provided there. The primary data are from several categories of data-logging sensors described in detail below. Sixteen images are also included as part of this data release. These document the sensor locations as described in Dundas et al. (NNNN).
By
Astrogeology Science Center
December 10, 2021

Sensor Data from Monitoring the Cooling of the 2014-2015 Lava Flow and Hydrothermal System at Holuhraun, Iceland

This data release is a companion to Dundas et al., NNNN. Additional description of the methods and rationale for data collection is provided there. The primary data are from several categories of data-logging sensors described in detail below. Sixteen images are also included as part of this data release. These document the sensor locations as described in Dundas et al. (NNNN).
By
Astrogeology Science Center