Landsat 7 was launched from Vandenberg Air Force Base in California on April 15, 1999 on a Delta II rocket. The satellite carries the Enhanced Thematic Mapper (ETM+) sensor.

Since June 2003, the sensor has acquired and delivered data with data gaps caused by the Scan Line Corrector (SLC) failure. 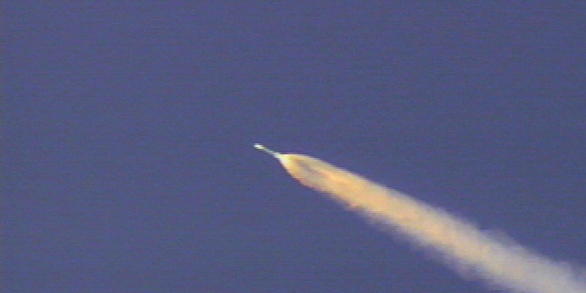 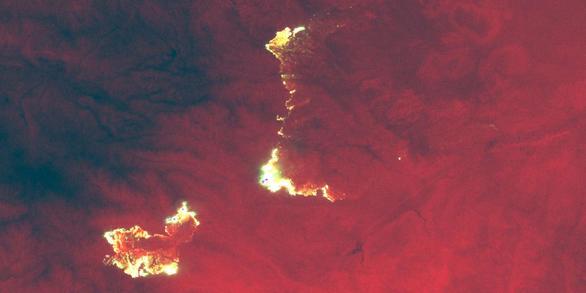 Landsat 7 data are acquired on the Worldwide Reference System-2 (WRS-2) path/row system, with swath overlap (or sidelap) varying from 7 percent at the Equator to a maximum of approximately 85 percent at extreme latitudes.

Visit Landsat Data Access for information on accessing products created from data acquired by the sensors onboard the Landsat satellites.

The Living Legacy of Landsat 7: Still Going Strong after 20 Years in Orbit (NASA)

Landsat 7 carries the Enhanced Thematic Mapper Plus (ETM+) sensor, an improved version of the Thematic Mapper instruments that were onboard Landsat 4 and Landsat 5. Landsat 7 products are delivered as 8-bit images with 256 grey levels. Descriptions of Landsat 7 band designations and comparisons of all Landsat sensors are available.

On May 31, 2003, the Scan Line Corrector (SLC), which compensates for the forward motion of the satellite, failed. Subsequent efforts to recover the SLC were not successful, and the failure is permanent. Without an operating SLC, the sensor’s line of sight traces a zig-zag pattern along the satellite ground track.

As a result, the imaged area is duplicated, with a width that increases toward the edge of the scene.  When the Level-1 data are processed, the duplicated areas are removed, leaving data gaps. Although these scenes only have 78 percent of their pixels remaining after the duplicated areas are removed, these data are still some of the most geometrically and radiometrically accurate of all civilian satellite data in the world. 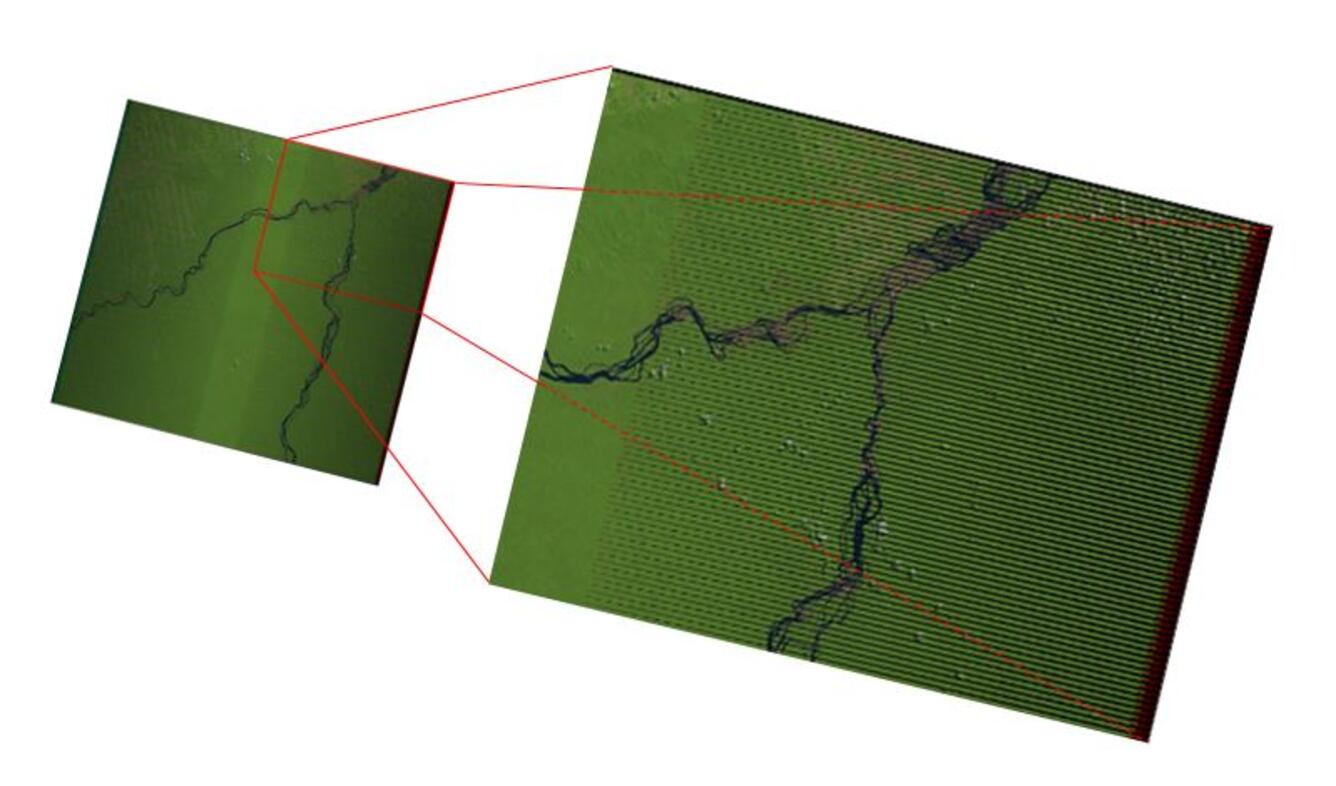 A number of papers were written about the Landsat 7 Scan Line Corrector:

This 2021 publication describes the research conducted into the science capability of Landsat 7 ETM+ data, while the satellite is drifting in orbit. 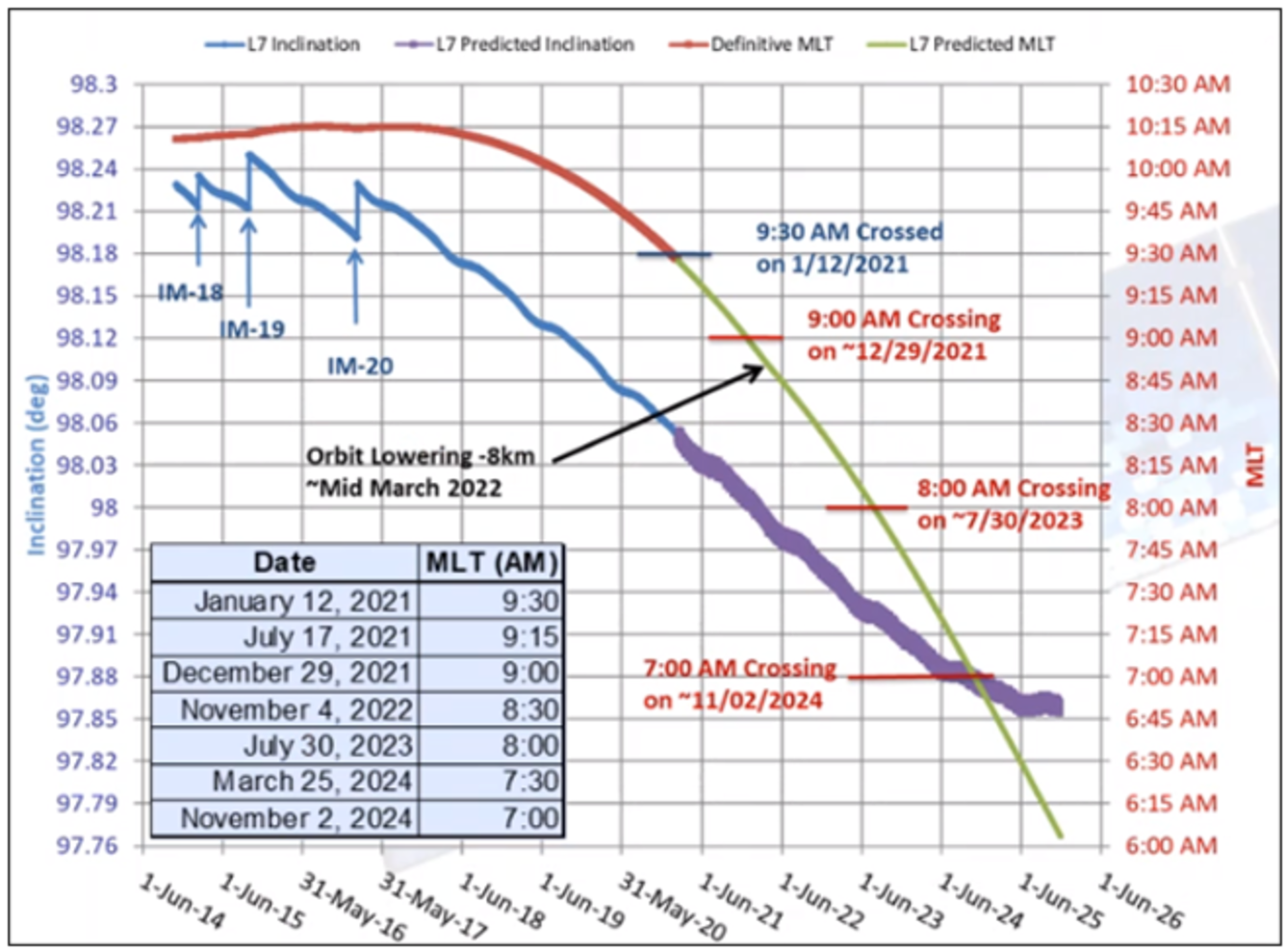 The USGS and NASA are planning for Landsat 7 to remain on-station and fulfilling its current science mission until Landsat 9 completes its commissioning. Sometime after Landsat 9 is nominally acquiring science mission data, Landsat 7 will exit the constellation and lower its orbit by 8 km to prepare for servicing by NASA’s On-Orbit Servicing, Assembly, and Manufacturing-1 (OSAM-1) mission. The mission - the first of its kind in low Earth orbit - will provide Landsat 7 with the needed fuel for a successful decommissioning.

Landsat 8/LDCM’s Underfly with Landsat 7: In March 2013, the Landsat 8 satellite (then known as LDCM) was in position under Landsat 7 to collect near-coincident data for calibration activities. 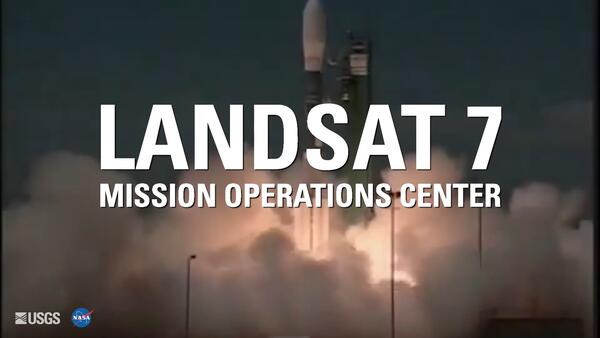 Can Landsat 7 preserve its science capability with a drifting orbit?

Since 2017, the orbit of Landsat 7 has drifted outside its nominal mission requirement toward an earlier acquisition time because of limited onboard fuel resources. This makes quantitative analyses from Landsat 7 data potentially unreliable for many scientific studies. To comprehensively understand the effect of ongoing (2018–2020) orbit drift on Landsat 7 data, we compared surface reflectance and
By
Earth Resources Observation and Science Center, Earth Resources Observation and Science (EROS) Center
August 31, 2016

Now in its 17th year of operation, the Enhanced Thematic Mapper + (ETM+), on board the Landsat-7 satellite, continues to systematically acquire imagery of the Earth to add to the 40+ year archive of Landsat data. Characterization of the ETM+ on-orbit radiometric performance has been on-going since its launch in 1999. The radiometric calibration of the reflective bands is still monitored using on-b
By
Earth Resources Observation and Science Center, Earth Resources Observation and Science (EROS) Center , EROS CalVal Center of Excellence (ECCOE)
November 25, 2015

Since 1972, Landsat satellites have continuously acquired space-based images of the Earth’s land surface, providing data that serve as valuable resources for land use/land change research. The data are useful to a number of applications including forestry, agriculture, geology, regional planning, and education. Landsat is a joint effort of the U.S. Geological Survey (USGS) and the National Aeronau
By
Earth Resources Observation and Science Center, Earth Resources Observation and Science (EROS) Center
December 24, 2014

The current Thematic Mapper (TM) class of Landsat sensors began with Landsat-4, which was launched in 1982. This series continued with the nearly identical sensor on Landsat-5, launched in 1984. The final sensor in the series was the Landsat-7 Enhanced Thematic Mapper Plus (ETM+), which was carried into orbit in 1999. Varying degrees of effort have been devoted to the characterization of these ins
By
Earth Resources Observation and Science Center, Earth Resources Observation and Science (EROS) Center , EROS CalVal Center of Excellence (ECCOE)
link
June 15, 2018

Life in satellite flight operations is busy enough without the disruption of uprooting and moving an entire Mission Operations Center (MOC). Yet that...

Successful Maneuver Spells Beginning of the End for Landsat 7

On Tuesday, February 7, Landsat 7’s Flight Operations Team fired the spacecraft’s 1-pound thrusters for about 13 minutes. After a pause of about 7½...